Institutional structure of the power sector in Karnataka 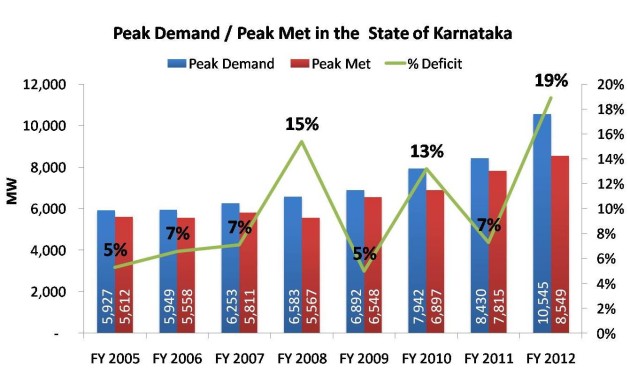 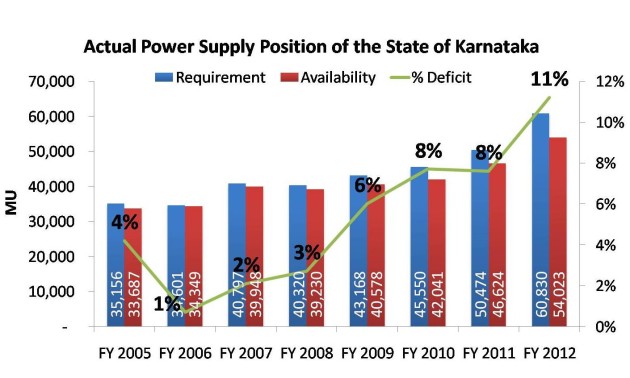 Based on the data (graphs), the electricity availability against the demand is low and the deficit is increasing in each year. It is expected that the power deficit post 2012 will continue to increase as the demand for power is continuously surpassing supply. Increasing coal supply shortages and unfavourable climatic conditions resulting in reduced water levels have been the main causes of energy deficits.

Position of Renewable energy in Karnataka

The state government has provided financial support of Rs. 10,289 Cr [1] for power sector mainly for coal-based capacity. However projects based on coal are expected to get delayed due to environmental concerns and coal shortages. To overcome this, the state government is aggressively exploring accelerated capacity addition of renewable projects in the state.

The Karnataka Renewable Energy Development Limited (KREDL) is an organization working to promote renewable energy in the state. It operates under Energy Department, Government of Karnataka. The Karnataka Renewable Energy Policy was announced by KREDL for the period of 2009-14. This policy aims at adding 1000 MW capacity each year from renewable energy resources.

Reference: All the quantitative data is sourced from Central Electricity Authority (CEA) website.

[1] In order to reduce the demand-supply gap, Government of Karnataka has taken initiatives to improve the generation capacity of the state. The government through its state annual budget 2012-13 has provided an outlay of 10,289 crore INR for the sector. (PWC report, CII Karnataka Conference on Power 2012)