The institutional structure of the power sector in Tamilnadu

Position of Renewable energy in Tamilnadu 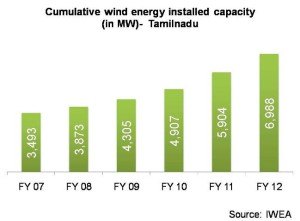 In spite of 18,382 MW of installed capacity; the state of Tamilnadu is struggling to fulfill its electricity demand. The electricity demand in the State had increased but the capacity of the generating facilities had dropped due to inefficiencies resulting in shortfall. Most of the districts in Tamilnadu face power cuts lasting over six hours. Between April 2012 and February 2013, the energy and peak shortage of power in Tamil Nadu were 17.4 percent and 12.3 percent respectively of the demand (The Hindu Businessline). However, Chief Minister Jayalalithaa told the Assembly on Feb 2013 that the problem of power shortage will be overcome by the end of 2013 (The Hindu Businessline).

Let’s hope for better electricity conditions in the sate with enhanced management and encouragement to other renewable energy technologies.