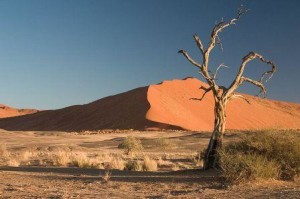 Engineers at the Kyoto University of Japan, in cooperation with Panasonic Corporation developed a new technology which can be used effectively for successful greening of the desert areas.

Experts of Japan proposed to mix the dry sand along with special reagents which have the capability of holding water and do not allow this water to get absorbed deeper into soil. The special reagents can help in forming the fertile layer below soil surface. This fertile layer can preserve up to 70 percent moisture. The new technology does not ban the circulation of air inside the soil and thus helps in promotion of growth of plants.

It is important to note that producing one ton of the special reagent costs around 10 million yen or 100 US dollar. It is planned that the marketing of technology will commence from 2016. The technology will be high in demand in Middle East, Africa as well as Central Asia. In these particular areas, the problem of greening the landscape is more. The technology will thus help in fighting desertification in acute areas.

The idea was conceived by taking a clue from the home electronics manufacturer’s know-how for water-shedding surfaces used to prevent rice from sticking in rice cooker bowls.

Panasonic and Kyoto University have built a machine to make around 300 tons of sand water-repellent per month at a cost of less than 10,000 yen (about US$ 100) per ton. The company hopes to build a commercially viable version of the machine in fiscal 2016 for sale in Africa, the Middle East and Central Asia.