India’s energy demand has been growing rapidly since the last two decades. This demand has been boosted by industrial growth and also because of the rise in household consumption. On the other hand, energy supply has also increased but has been outstripped by the ever rising demand. India derives most of its energy from fossil fuels, primarily coal. The coal reserves of the country are limited and a growing number of power producers are looking to import coal from resource rich countries like Indonesia, Australia and South Africa.

Climate Change is another important driver in the renewed interest in renewable energy. India has taken up this issue at the highest level, with the National Action Plan for Climate Change (NAPCC) being formulated by the Prime Minister’s Office. Under this plan, the Government of India has set a target of reducing country’s carbon emissions intensity of GDP by 20% to 25% between 2005 and 2020. Under the NAPCC, India outlined eight goals to achieve sustainable growth. In addition, it is crucial to encourage investment in renewable energy.

Consumer driven demand for the use of renewable energy is also picking up its space.  As demand for energy grows rapidly, shortage of conventional fuel i.e. coal and other fossil fuels in the country is making consumers think more seriously about sourcing their energy from renewable sources like wind, solar and biomass.  As a result of this ever increasing demand for energy and India’s in house National Action Plan on Climate change, the government of India is seriously looking to encourage renewable energy sector at every possible level of the economy.

Accordingly, the Government has formulated various policies to encourage businesses to install more renewable energy capacity in the country. As a result of an encouraging investment climate, wind power has grown rapidly in the country. From just 41 MW in 1992, the total installed capacity has reached almost 18,000 MW this year. Biomass too has grown in the last few years. The Government has now set a target of achieving solar energy installations of 20,000 MW by the year 2020 (Read more on National Solar Mission). Renewable energy today constitutes a significant part of India’s energy mix and is set to grow further in the coming years. As shown in  figure 2, only one percent of the total energy mix was contributed by renewable energy sources in 2002. Due to government’s encouragement like various subsidiaries for the RE sector including accelerated depreciation benefits for Indian wind energy sector, the share of renewable energy in India’s energy mix has grown drastically. It was 6% in year 2007 and got doubled in 2012. 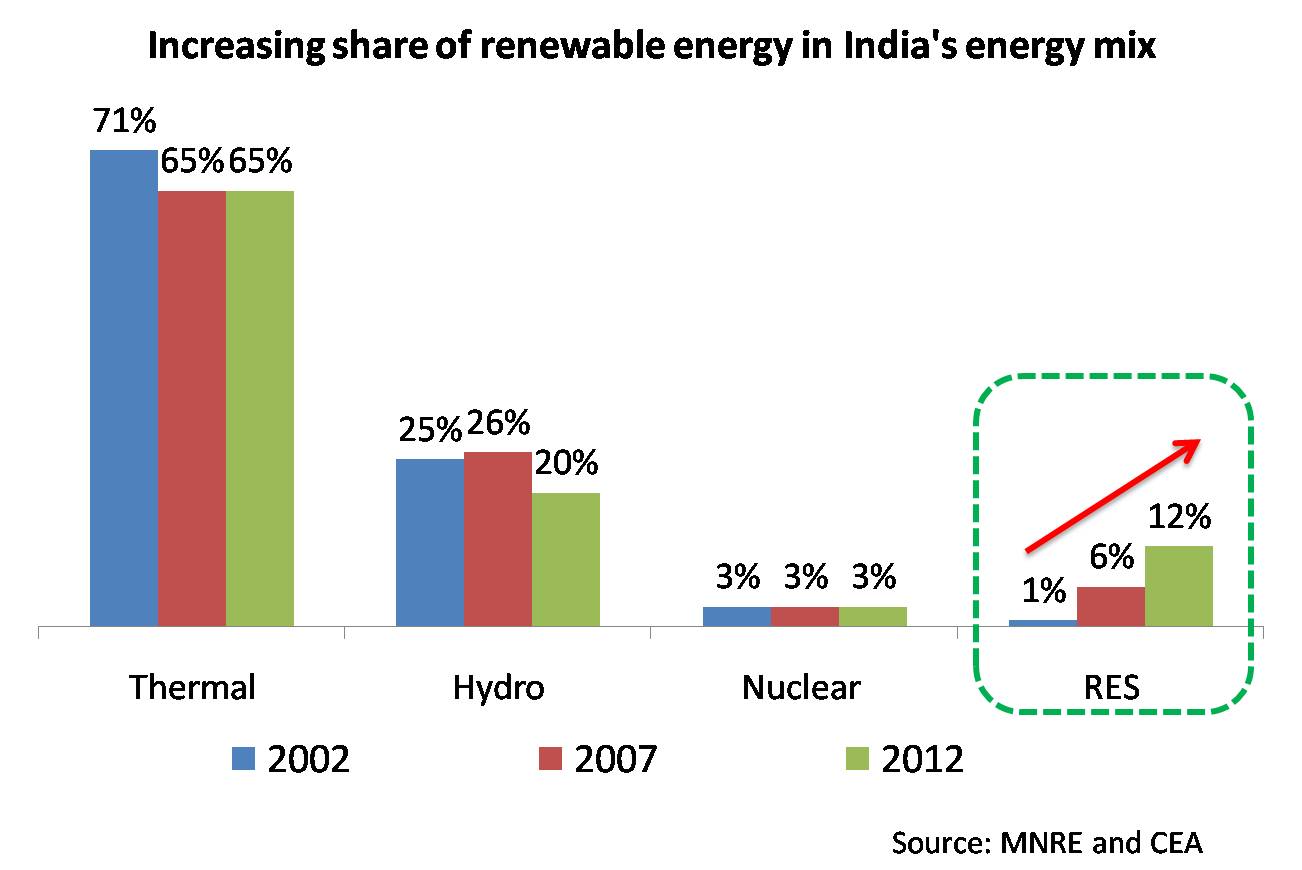 Environment is a key focus area for sustainable growth. Further, energy usage is one of the topmost concerns. Renewable energy is not just a possible answer to climate change but more importantly, is a valuable source of energy and increasingly, an important part of revenue generation in the economy. In addition, coal shortage is estimated to continue in the near future as environment clearances and land acquisition issues take time to resolve.  This shortage is a risk  in terms of shortage of energy. To mitigate this risk, renewable Energy is the only solution that seems fit in the current and future energy scenario.