A new online Atlas of freshwater biodiversity that presents spatial information and species distribution patterns was launched on 29 January 2014 at the landmark Water Lives symposium. The symposium (conference) brought together the European Union policy makers and freshwater scientists. 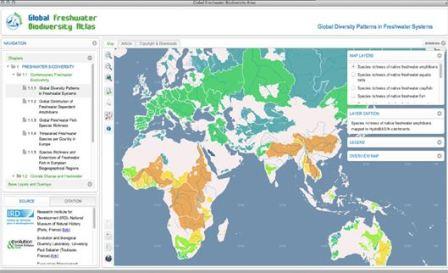 Freshwater that is quite important for diverse habitats covers only 1 percent of total earth’s surface and is a home for about 35 percent of all vertebrate species. A vertebrate is an animal that has an internal backbone and a skeleton that is made of bones and it also include humans. Some other vertebrate species are fish, amphibians, reptiles, birds, mammals, primates, rodents and marsupials.

Studies show that the freshwater life on earth is declining at an alarming rate as it is faster than any other component of global diversity. At present the demand of the policy is the protection of freshwater from the energy, food and sanitation sectors. At present scenario is to frame a policy that integrates of freshwater life and the ecosystem services it provides. The policy calls-in with real and pressing demands on freshwater resources from the energy food and sanitation sectors. The newly launched online atlas is a response from freshwater scientists to key geographical information and spatial freshwater biodiversity across different scales.

Atlas is an output of BioFresh (European Union funded project) that is putting together the scattered pieces of information about life in rivers and lakes. This will help in managing and protecting the freshwater for generations to come. Biodiversity of Freshwater Ecosystems: Status, Trends, Pressures, and Conservation Priorities. It is funded by the European Union under the 7th Framework Programme with Theme Environment including Climate Change.

You can access Online Global Freshwater Biodiversity Atlas from here