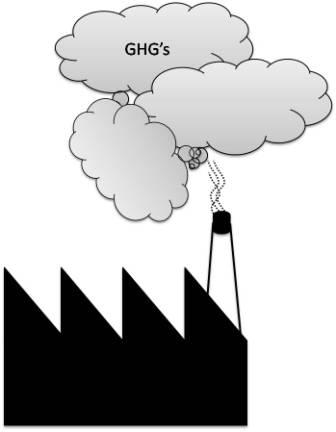 Scientists discovered a new method to convert harmful Greenhouse Gases (GHGs) into chemicals which can produce synthetic fuels on 2 February 2014.

A team of researchers at the University of Delaware has developed a highly selective catalyst capable of electrochemically converting carbon dioxide (a greenhouse gas) to carbon monoxide with 92 percent efficiency. The carbon monoxide then can be used to develop useful chemicals.

It was found that when a nano-porous silver electrocatalyst was used, it was 3000 times more active than polycrystalline silver, a catalyst commonly used in converting carbon dioxide to useful chemicals.

Silver is considered a promising material for a carbon dioxide reduction catalyst because of it offers high selectivity approximately 81 percent and because it costs much less than other precious metal catalysts. Additionally, because it is inorganic, silver remains more stable under harsh catalytic environments.

The exceptionally high activity is likely due to the UD-developed electrocatalyst’s extremely large and highly curved internal surface, which is approximately 150 times larger and 20 times intrinsically more active than polycrystalline silver.

The active sites on the curved internal surface required a much smaller than expected voltage to overcome the activation energy barrier needed drive the reaction.

To validate whether their findings were unique, the researchers compared the UD-developed nano-porous silver catalyst with other potential carbon dioxide electrocatalysts including polycrystalline silver and other silver nanostructures such as nanoparticles and nanowires.

The research team’s work is supported through funding from the American Chemical Society Petroleum Research Fund and University of Delaware Research Foundation.