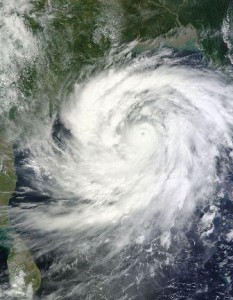 On 10 October 2013, the Phailin was equivalent to a category 1 hurricane on the Saffir-Simpson hurricane wind scale (SSHWS). On 11 October 2013, it became equal to the category 5 hurricane on the SSHWS. Phailin made its landfall near Gopalpur in Odisha coast wherein it subsequently weakened. Efficient disaster management, which is perhaps the first of its kind in India, restricted the death toll to just 23.

Having learnt its lesson after the disastrous natural disaster of Uttarakhand,the Union Government along with the State Governments of Odisha and Andhra Pradesh took precautionary measures in order to mitigate the disaster. The Armed Forces were put on high alert and the teams of National Disaster Response Force (NDRF) were deployed in order to carry out the rescue and relief operations. The Indian Air Force (IAF) deployed 24 aircraft, including Ilyushin-76, C-130J Super Hercules and the Antonv-32, along with 18 helicopters.

A cyclone is an area of closed, circular fluid motion which rotates in the same direction as the Earth. Its primary characteristic is inward spiraling winds which rotate in the anti-clockwise direction in the Northern Hemisphere and clockwise direction in the Southern Hemisphere of the Earth. Cyclone Phailin was a tropical cyclone. The tropical cyclones form only on the warm ocean waters near the equator. For the formation of the cyclone, warm and moist air over the ocean rises in the upward direction from near the surface.

Impact of global warming- induced sea level rise due to thermal expansion is more pronounced in the Bay of Bengal due to the shallowness of the waters. The entire coastal ecosystem in general and the eastern coast in particular are highly vulnerable due to flat and low terrain, high population density, over exploitation of natural resources, high rate of environmental degradation on account of pollution and non-sustainable development.

2001-2010 has also been called the decade of climate extremes. According to the World Meteorological Department report titled The Global Climate 2001-2010, A Decade of Climate Extremes, there were high incidences of climate extremes during this period. It is also the warmest decade ever.

Although cyclones affect the entire coast of India, the East Coast is more prone compared to the West Coast.

GCG in conversation with Chris Allan