The most troubling and inevitable danger to humanity is self-conjured. It is not a meteorite, the death of our sun or even our nuclear meddling. Instead, research indicates that global warming may be our fall. At the rate we are going, major cities across the world will be swallowed by the sea. 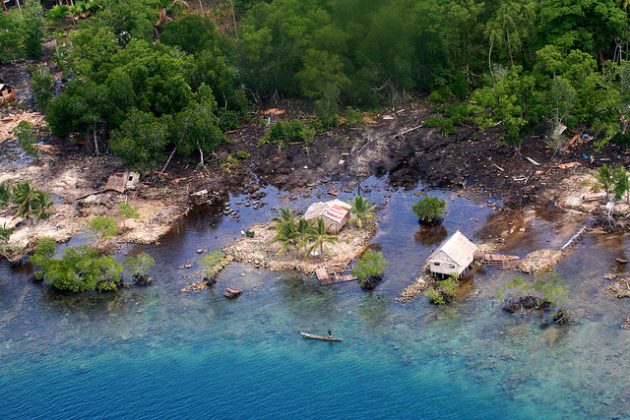 Within the next two centuries, research indicates the oceans may rise by as much as seven feet globally, engulfing vast tracts of lived-in coastal areas, putting millions — potentially billions worldwide — out of their homes and in danger.

Projections range on the amount of sea level rise the world will experience in the coming centuries. Estimates have ranged from a few inches to nearly 50 feet by the year 2500. Whatever the reality may be, some rising in the ocean levels is inevitable. With the rising in global temperatures and the continued decay of ice sheets at the top and bottom of the world, the oceans will slowly advance toward more inhabited areas.

This danger is not an immediate one: those living in cities most at-risk for oceanic flooding will have many years before they are forced out by the advancing waters. However, the long-term implications of urban flooding can’t be fully understood at this time, and will undoubtedly result in some chaos as large numbers of people flee their homes.

Here are a few of the hardest-hit areas around the world.

Several cities across the US will be significantly flooded following a rise in the ocean levels. Flooding has already observably increased in many US areas by between 325 and 925 percent in the past 50 years. Should this trend continue in the foreseeable future, many areas could end up underwater. Urban centers, where the population is most condensed, are the largest concern.

The worst-hit of all is New York City, in which around 700,000 people live under the high-water mark. Particularly areas right off the Hudson — around Liberty State Park and the surrounding region —  will be entirely underwater. Entire city streets engulfed by the advancing tides, and life itself reimagined for many in the city.

New Orleans is no stranger to flooding, as seen during the apocalyptic Hurricane Katrina. However, when the sea itself rises to engulf the city, relocation may become permanent. In the case of New Orleans, the biggest problem is clear: the city is located beneath sea level. When the floodwaters arrive, they tend to stay in New Orleans, rendering vast sections of the city uninhabitable. For a city already surrounded by swampy coastal zones, New Orleans may be entirely underwater before we know it.

Several cities across Florida remain near the top of the at-risk list. Florida is low country, and like Louisiana, tends to flood. As with New Orleans, cities along the Florida coast will be subject to the worst of the flooding as the sea levels continue to rise. Chief amongst these are Miami, St. Petersburg, Ft. Lauderdale, Hollywood and Hialeah. For many of these areas, the water will cover entire sections of the city, necessitating relocation or some other means of living above the surf.

Along the West Coast, areas of California — Stockton tops the list — will also experience some significant flooding, displacing over 100,000 people in the process. Boston also ranks highly on the list as another large, Northeastern coastal location. Boston could find everything from the city center to areas of Cambridge swamped in the coming years.

With the inevitable rise of ocean levels, China is in bad shape. The Eastern Chinese coast is, by a wide margin, the single most significant at-risk location around the globe. The majority of the Chinese population — which is the most sizeable of any nation on the globe — lives there, and will experience some degree of flooding as a result. Altogether, between 41 and 63 million Chinese citizens are at risk, should the projections of sea level rise become a reality.

Cities along the Pearl River Delta will be hit especially hard. These include major industrial areas such as Dongguan and Guangzhou. These cities already experience flooding: it is a seasonal danger in the area, and bad years signify millions of dollars in lost production and property damage, as well as the loss of lives in and around the river area. Rising tides will make this situation significantly worse.

As the cities continue to expand, they draw nearer to the Pearl River Delta, where the river meets the ocean, and an unpredictable, flooding-prone area. The delta itself will continue to enlarge in coming years, expanding into the zones miles around it, many of which are already inhabited. The seasonal rains which contribute to the already-dangerous flooding will make the situation significantly worse, and flood formerly exempt areas of the cities.

The largest Chinese cities are also at risk. Shanghai, which boasts a population of over 20 million, is engaged in a long and bitter struggle with the ocean — a struggle it will inevitably lose as the polar ice melts and sea levels rise. Like the aforementioned Guangzhou, Shanghai sits astride a river delta, a convenient location for any trade cities, but one that is inherently susceptible to flooding.

In the case of Shanghai, the rising tides are contributing to the erosion of the soft river soil on which the city is built, adding to structural instability throughout the city and a slow slide into the ocean. With each new year, more money is required to keep sections of this mammoth city out of the same sea that brought its prosperity.

Though the number of people affected by climate change throughout Vietnam is smaller than China, it is a significantly higher percentage of the country’s overall population. Over 23 million Vietnamese could find themselves homeless in the lowland areas, which is as much as 26 percent of the total population. Whereas China has ample rural areas far from the coast, Vietnam is not so lucky: the country features one of the longest continuous coastlines in Asia, and many may find themselves relocating to neighboring Cambodia.

Ho Chi Minh City is home to over 8 million Vietnamese and is the largest urban area in Vietnam. It is also listed as one of the most vulnerable areas to global climate change and future flooding. In the event of significantly higher waters, the lowland areas surrounding the city will become quickly submerged, as is common during the rainy seasons. However, when cresting waters are coupled with the severe weather common to Vietnam, the entire city could see severe flooding.

This is not to mention the fact that the majority of Vietnamese land — both urban and rural — resides less than 10 feet above sea level. With the advent of welling oceans, a huge percentage of Vietnam is likely to end up partially or wholly submerged, making for an unprecedented refugee crisis if not handled correctly.

As much of the rural areas within Vietnam are used for growing crops — particularly rice — an influx of seawater could have more profound financial repercussions for the coastal nation. Rice is typically produced within a range of rainfall and standing water, meaning a flood can wipe out the crops and waterlog entire fields of rice paddies.

Global climate change contributes to a plethora of other climate factors as well, including increased storm severity and rainfall to specific areas. Vietnam is likely to bear the brunt of all of this.

In Europe, this small coastal country to the west of Germany may lose more than any other nation worldwide. Forty-seven percent of the country’s population could be displaced by 2100, given the current trend in ocean rising. Though only seven million Dutch are at risk — much smaller than those exposed in China or Vietnam — it is a huge percentage of the country and would be devastating for the nation.

The largest population centers of the Netherlands are located in the North and South Holland areas of the Netherlands, along with the western coast of the country. Amsterdam, Rotterdam and The Hague are all within this area and mostly reside below sea level. These cities, while housing a massive percentage of the Dutch population, also comprise the largest manufacturing and shipping centers for the nation’s economy. Extensive flooding could mean the end of the Netherlands as we know it.

All this said, the Netherlands is at the forefront where innovation and ingenuity against rising water are concerned. Flood prevention measures are a major part of the Dutch economy, and the greatest minds of the Netherlands are doubtlessly working on a long-term strategy for battling the tides.

Nobody can predict the future. Scientists studying the effects of climate change often recalibrate their predictions and continuously shifting global factors make it difficult to pin a number to such massive global shifts. However, particular facts remain. The world’s ice sheets are melting, and a tremendous amount of water is flowing into the ocean every day. As the water levels rise, we will bear witness to some extraordinary times. Millions will be displaced, former metropoles will become submerged husks of their former glory, and day by day, the temperatures will continue to rise.