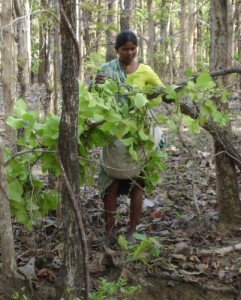 Livelihood is a short eight letter word which has a huge and a wide meaning. Livelihood is defined as “means of securing basic necessities of life such as food, shelter and clothes.” We, humans are in constant race of acquiring the so called “livelihood” by any means-by hook or by crook! But pause for a moment and let us think that are we not in the race which should actually not begin only? Are we not following a band wagon? Yes answer’s surely going to be in the affirmative side.

When it’s a discussion about making a world greener, we must know that livelihood has one of the major impacts on making the world greener and making a place where we can actually live. “Live and let others live.” is one of the motto always taught in our blooming school  days but we humans on becoming a so called adult, join in the tradition of acquiring each and everything from a pin to plane, besides what livelihood we need. The basic things which are required for a man to maintain his existence is a piece of cloth, shelter and food to survive. Buy today’s scenario is a “brother killing a brother” and a person killing his own child for the food. Entering the golden 21st century is this what which suits us? Is it not a big question mark on today’s society?

Yes! The quotation depicts the reality of our today’s cement and concrete life. We all for our purpose are destroying the gift of nature-flora and fauna, the natural aesthetic beauty, mountains, rivers, and a long list follows. “Greed eats all” is the proverb which proves to today’s man. In the name of urbanization, industrialisation, etc we all are in a rush to achieve our big dreams forgetting the only earth which we have.

Global warming has its foot on its head, increasing at an alarming rate. Ozone layer depletion is also one of the major problems. Due to global warming the glaciers are melting down which has caused many problems in major part of the world. Do we not think that the Uttarakhand tragedy that happened recently was a man-made destruction?  Reports from well recognized institutes show that it was the greed of man for constructing more and more on a small piece of land which led to such a tragedy which spreads shiver down the spine. History is also a witness to many such devastating destruction which changed the map of the world. This is all due to the greed of man in getting more and more quantitative livelihood.

There are some other reasons also for degradation of the nature. Illiteracy is in the sense of not having knowledge about environment, it’s importance and ways to protect. Population explosion is also one of the serious issues which need to be thrown a limelight. Due to population explosion, there is an increase in demand which in turn causes harmful effects on the environment. This all forms a part of our livelihood. In our daily life also we throw waste, pollute water and air. Vehicles, industries all play an important role in degradation of environment. Our mentality, orthodox nature and superstition also play a role in causing harm to nature. There are deep roots of destruction of what man has created through his way of living which needs to be eradicated. We normally follow the tag ‘Money matters’ but we need to think from deep inside is it is true? With money, we can buy everything (materialistic) but can we buy a new world?

So, to cut it in a brief there are many ways through which we can protect and save our environment.

Better to be safe then to worry is all what I can say. Creating awareness among so called ‘illiterate’ should be our major target. Use of resources judiciously and forming a habit of using renewable source of energy should be put into practice. In our day to day life also there are some small but effective ways that should be used such as using a public transport system, less use of plastics, use of e-books and lots more. Technology is progressing then why can’t we? Yes, technology can be one of the greatest tool through which we can create a minimal of awareness. Science is also growing in leaps and bounds. One of the major focuses should be on environmental studies.

So, last but not the least I would like to say that yes! We have to improve our way of living our livelihood. Each and every body should keep hands in hand and pledge for saving our environment and making it more greener and a better place to live otherwise dooms day is not so far…

Author’s Bio- Rahul Pasawala is a student of civil engineering in Nirma University (B.Tech). To protect the environment and creating awareness is his passion right from childhood. He has taken part in many events and rallies for creating awareness right from his school days.  He can be reached at  pasawala.rahul@yahoo.com