India has looked to promote various renewable energy technologies starting with the National Climate Change Missions. Perhaps the most well known is the most promoted National Solar Mission that seeks to exploit solar energy in India for generating power.

The Indian government has initiated a programme to assess solar radiation resource of the country. In Phase-I under this programme, Solar Radiation Monitoring Stations have been established at various part of the country through Centre Wind Energy Technology (C-WET), Chennai. The data from various stations is transmitted to a central server maintained at C-WET and is made available to various stakeholders after carrying out quality checks.

The findings of this study have indicated that many states, such as the Western States viz. Gujarat, Rajasthan, Maharashtra and Andhra Pradesh, and some parts of Tamil Nadu, Karnataka, Madhya Pradesh have enormous potential for setting up grid connected solar power projects in the country.

However, a comprehensive survey of land for setting up of solar projects has not been carried out in any state. Read more on solar technologies here.

The government has tried to promote renewable sources of energy and distribution companies are free to purchase renewable energy in excess of the stipulated Renewable Purchase Obligation (RPO).

Under the programme, a target of setting up 1.06 lakh biogas plants has been fixed under NBMMP for the year 2013-14. State-wise targets and achievement under national biogas and manure management programme (NBMMP) during the year 2013-14 is given below: 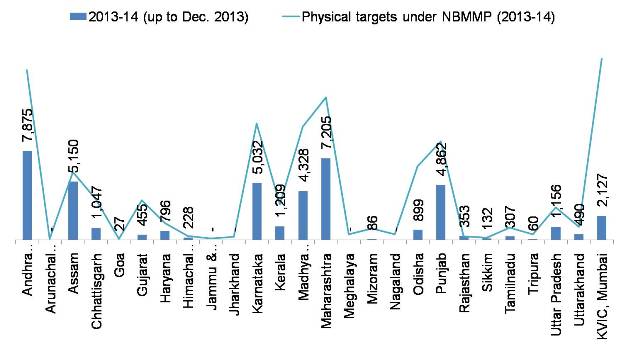 Biogas is a very profitable option especially for the villages where traditional sources of energy are hard to come by. The State-wise number of households covered by family type biogas plants during each of the last three years is given below:

* Annual achievements of KVIC, Mumbai have been distributed among States

The wind sector in India has also progressed in the last decade. India is endowed with large wind energy potential.  The total estimated wind Energy Potential taken at the wind speed of 50m/hr. is 49130 MW & calculated at the rate of wind speed of 80m/hr. is 102788 MW.

The State-wise wind power potential as per Wind Atlas is as below; 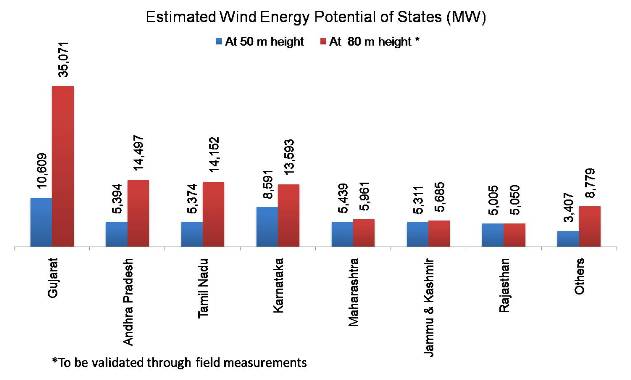 The installed Capacity of Wind Energy is as below; 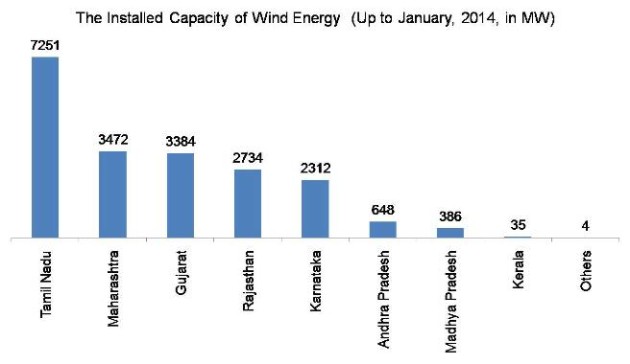 The government of India promotes wind generation by giving Rs.0.50/Unit under the Generation Based Incentive (GBI) as incentive for generation of power subject to a ceiling of Rs.1.00 crore/MW. The benefit is to be availed in more than 4 years and less than 10 years.  The year-wise targets and achievement in last three years and current year are given below;