The process of getting grass to grow can be a lengthy one, but many people — from neighborhood residents to transportation authority directors — realize that a technique called hydroseeding gives desirable results while also being kind to the environment. Because of that reality, there has been an increase in using hydroseeding as part of sustainable agriculture plans.

What Is Hydroseeding, and How Does It Work?

Hydroseeding involves adding a mixture of grass seed, fertilizer, mulch and soil additives to a tank, then applying it to the soil via a high-pressure distribution system that combines all the ingredients to form a slurry and sprays it on the soil with a hose. The slurry also includes an organic “tackifier” (glue) that helps the seed stay in contact with the grass.

When applying grass seed by hand, wind and rain can cause it to migrate. However, the tackifier additive used for hydroseeding minimizes that issue.

The slurry also usually includes a colorant that naturally fades over time but is used during the application process, so the professional handling the job can check for thoroughness. A particular kind of dye, known as Malachite Green, was once one of the most popular types used by landscape professionals. 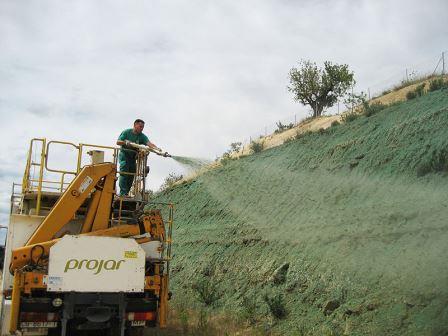 However, Minnesota’s Department of Transportation eventually banned that additive for all hydroseeding applications due to a concern that it could adversely affect the state’s waterfowl and marine life. Sensient Industrial Colors, LLC responded to the development by creating new environmentally-friendly colors that are either similar to the hue of natural grass or otherwise highly visible.

These additives prevent the potential issue of over-spraying, which could reduce the cost-effectiveness of hydroseeding as a grass-laying method. Simultaneously, the visibility of the colors eliminates the possibility of bare spots.

Hydroseeding Promotes the Use of Various Native Grasses

One of the clear advantages of hydroseeding is that almost any variety of grass that grows from seed is a good candidate for this method. For example, a type of grass that naturally thrives in shady areas could be used in an area that has many large and well-established trees. If a client does not want to cut down trees to facilitate grass growth, a hydroseeding professional could simply recommend using a type of seed that works well for shaded sections of land.

Also, within the sustainable agriculture movement, there is a significant push toward using native grasses. For example, native grasses may not require such heavy pesticide usage as grass that’s not naturally from the region. Also, the grasses provide sustenance for bees that are common to the area.

Even better, it’s not necessary to only use one type of native grass in a hydroseeding application. For one project that required hydroseeding, which was a section of interstate in Southern California, transportation authority crews applied a specialized mixture of several native seeds.

Additionally, they relied on a sourcing company that provided site-specific seeds harvested by people who received special training to identify types of grasses and determines which ones will grow in an area. In some cases, the seeds undergo testing to verify germination rates.

Grasses that are native to an area naturally promote water conservation, too. Because they have already adapted to the climate over time, they’re not overly thirsty. Due to that perk, landscapers often use them in places where irrigation is difficult to manage, such as along the side of a road or in sections of land that are prone to drought.

Native grasses typically have deep root systems, too, which makes them suitable for creating grass-covered slopes. Plus, the practice of hydroseeding itself fosters a deep root system. The first mowing of a hydroseeded lawn, which should occur once the grasses are three to four inches long, promotes greater root production following germination.

Unlike sodding, which leaves the roots exposed to diseases, hydroseeding promotes an on-site root system since the grass is not cut during the germination process. Some native grasses have roots that go as many as five feet down into the soil, which makes the grasses able to easily obtain nutrients.

Hydroseeding Can Improve the Quality of Existing Soil

Hydroseeding is also often relied upon for sites where the soil quality is very poor. For example, a section of land that’s undergoing construction may have been stripped of topsoil and the microflora and fauna that naturally stimulate plant growth.

In that case, a hydroseeding professional could add natural or manufactured soil conditioners. They help seeds become established and encourage them to grow by altering the physical or chemical characteristics of the soil. Both inorganic and organic soil conditioners give nutrients to the surrounding plants, plus they improve the soil’s aeration and drainage.

Also, because hydroseeding occurs through an application from a sprayer, this method of aiding unhealthy soil is quick and cost-effective — more so than mixing the additives into the soil through other techniques. When using some kinds of soil additives, it’s possible to cut the application time in half compared to treating the area with topsoil.

Plus, these soil treatments offer a sustainable alternative to peat. Because peat-rich landscapes can take years to recover from disturbances caused by harvesting and are already under threat from agricultural and urban development projects, concerned researchers have looked at alternatives and found that the aforementioned soil treatments have numerous perks associated with them.

Landscaping professionals have chosen hydroseeding to deal with erosion-prone areas with notable success. In one case study, hydroseeding was used alongside a cellular, grid-like confinement system to restore vegetation to sloping sections of Panama near Punta Raton Beach.

Vegetation began to take root on the slopes after only eight days. Three weeks after the area was seeded, the area was filled with plentiful vegetation. The speedy germination time of the grasses led to fast results, and the grid system prevented further erosion from occurring. Years later, the ground was still green, healthy and no longer heavily eroded. As a result, Punta Raton Beach became more attractive to international investors and was less problematic for residents.

Mulch Acts as the Growth Medium for the Grass Seed

As mentioned earlier, mulch is one of the key ingredients used in hydroseeding. It’s essential for a few reasons:

The mulch retains moisture, which means less watering and better germination since the seeds are less prone to drying out.

Hydroseeding with the proper kind of mulch prevents seed dormancy. Specifically, the soil must remain from between 45-55 degrees Fahrenheit for seed germination to occur. When it gets colder than that, the germination ceases for the season until the weather warms up again. The insulating effect of the mulch means that freezing temperatures will not kill the newly sprouted grass or seed that is yet to germinate.

There is also no need to continue watering the area during the winter. Germination resumes when the soil returns to the optimum amount of warmth.

The average amount of time it takes for hydroseeded grass to grow is frequently less than a week. That short duration means this method is ideal for heavily trafficked areas.

During the germination process, hydroseeding requires an abundant water supply. Eventually, though, the grass that sprouts is quite drought-resistant. Some hydroseeded grasses can hold up to 10 times their weight in water. Mulch and tackifiers aid in water retention and slowly release moisture and nutrients to the root system. Additionally, the root system forms deep into the soil where the water level is particularly high.

Together, these characteristics result in a lawn that is resistant to drought conditions and does not require excessive watering. Therefore, clients who are committed to upholding sustainability by not wasting resources frequently find that hydroseeding helps meet their needs.

Hydroseeding Can Reduce the Growth of Weeds

Many people merely view weeds as pesky problems that make their lawns look worse, not realizing that weeds also adversely affect environmental sustainability. For example, they can make soil erosion worse, particularly when they overtake perennial grasses that naturally protect against erosion. Furthermore, weeds can limit biodiversity once they compete with native grasses and eventually dominate them.

However, hydroseeding can limit weed growth, especially when it’s done in the spring or summer. Most hydroseed mixtures are virtually free from weed seeds. That means the sprouted grass is easier to maintain and is not characterized by the harmful weed-related effects described above.

Hydroseeding Is a Non-Toxic Solution

In addition to not harming the environment, hydroseeding is a good solution for encouraging grass to grow in areas frequented by kids or pets. The mixtures used are non-toxic and should provide peace of mind to people who are concerned about using harsh chemicals near members of their households.

Many individuals who are interested in sustainable agriculture prefer to use household cleaners that do not have environment-destroying ingredients. By choosing to explore hydroseeding, they can treat their lawns similarly to how they’d tackle dirty toilet bowls or kitchen counters — with agents that promote environmental sustainability instead of hindering it.

This exploration of reasons why hydroseeding and sustainable agriculture go hand in hand should be enough to convince forward-thinking and eco-minded people to reconsider decisions to use other methods of planting grass seeds. Hydroseeding is kind to the planet, plus it’s quick to apply, which makes it suitable for areas that may require urgent interventions, such as construction sites and roadways.