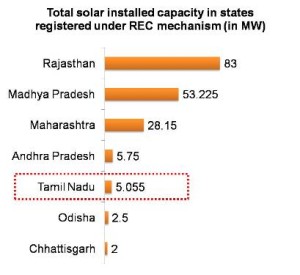 Solar sector is picking up pace in the state with increasing interest among private players. Tamil Nadu state solar policy and the newly introduced Solar Purchase Obligations (SPO), have triggered development in the solar sector.  Under SPO, obligated entities have targets to buy certain percentage of their total energy requirement from solar energy source.

Every obligated entity should have met its target as a result of their own generation from solar technology based power plants or through procurement of power from other solar energy generators or by way of purchasing Solar -Renewable Energy Certificate (REC0 or by the combination of all.

Tamil Nadu solar policy entered into force in 2012 and will be operational till 2015. This policy aims to achieve 3000 MW of installed capacity by 2015 (1500 MW from utility scale, 350 MW for rooftops and remaining 1150 MW to be achieved through projects under REC mechanism).  It also mandates 3% SPO requirement till December 2013 & 6% SPO requirement from 2014. Solar park development is another attractive feature under this policy. Developers would be selected through competitive bidding for the development of solar power projects in the state. TEDA is the nodal agency and would be responsible for granting single window clearance and various other statutory clearances required for the development of the project (Read more here).

At this stage, the registered solar capacity is very low as compared to the wind capacity (Total registered capacity under REC mechanism for wind energy in Tamil Nadu is 844 MW as on Sep 2013.). However, it is expected to increase considering increasing awareness for solar sector, decreasing cost of solar panels, favorable government’s policy and the ever increasing energy shortfall in the state.