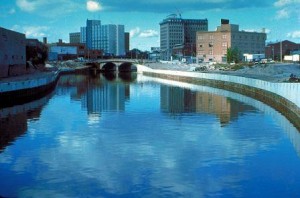 As of Jan 16, Flint, Michigan, is in a national state of emergency due to contaminated water. The problem is that it’s only now happened. The government, in many ways, failed the citizens of Flint. Their water has been contaminated, their requests for assistance were largely ignored and, to add salt to the wound, the local government continues doling out water bills.

If you look at the water in Flint, you can tell it’s dirty. It comes out of the taps a rusty brown due to iron being eaten out of the pipes by destructive water. However, the iron is only the visible part of the problem. The scary part is what you can’t see.

In April 2014, residents of Flint began to complain about a strange taste and odor coming from their water. As the city struggled to find a solution to keep drinking water available to its residents, it cut a few corners. Instead of taking water from Lake Huron that had already been treated, it began taking water from the Flint River. That, on its own, would not have been a problem if it had properly adjusted its treatment process.

Unfortunately, it didn’t. The water from Flint River was harsh enough to erode the pipelines, and iron began to leach into the water supply. That iron is what the citizens were tasting, smelling and complaining about, but along with the iron came lead.

If, at the time of the initial complaints, someone in the government had simply had the water tested, this whole thing may well have been avoided. The fix wouldn’t have been too terribly difficult either – it simply needed to add the correct anti-corrosive agents to bind with the added chlorine and prevent the pipes from being eroded. The problem with that plan is that the agents cost money, and Flint was already strapped for cash. So it simply didn’t do it.

If people started drinking lead-laden water back in 2014, what are the potential impacts? Lead poisoning is a very real possibility, considering anyone who drank tap water in the city was exposed to the toxin.

Of course, as with all chemicals, the dose makes the poison. Additionally, your liver and kidneys do a pretty good job at filtering out pretty much any toxin you ingest. Since many people simply stopped drinking the water, there aren’t nearly as many people who have ingested a large amount of lead as there could be. So, while there is a potential for the problem to become much larger, only 43 people had elevated blood levels as of December 2015.

While it is good news that a small number of people had elevated lead levels in their blood stream, this doesn’t give us a solid idea of what to expect. A blood test can only determine how much lead is currently circulating in the bloodstream, but it gives us no understanding of how much might already be stored in the body. Since lead is stored in people’s bones, it’s only seen with the X-ray.

The issue is that we don’t really have a good way of understanding how many people have been exposed to toxic levels, or even what a toxic level might be. In other words, there is no known level of lead exposure that is considered safe. Anyone in the town, child, adult or fetus, who was exposed to the city’s water after April 2014 may face lead poisoning.

The Price of Ignorance

There’s nothing quite like a financial crisis to empower people to make bad decisions. After all, this whole problem started with the city simply trying to save some money. Of course, this was compounded by what some people are saying is contempt for the citizens. In other words, despite the people’s outcry, they were ignored for months.

Government testing found high levels of contaminants in the supply, mainly E. coli. Levels of E. coli that exceed 235 cfu per 100 mil of water have the potential to cause disease. They added chlorine to kill the bacteria. That alone should have set off a red flag, but it didn’t. Then the people complained that their water was discolored, smelled terrible and tasted bad. General Motors refused to use the water in Flint because it was eroding their machinery. This large, profitable company, was given access to a different line. Residents were not.

Restructuring for the Future

The city’s motto seems to be “Don’t ask permission, beg forgiveness,” and in this case, it will be begging for a long time. This isn’t exclusive to Flint. The city has an old water system, but so do many other places in America. The cost of updating all of those waterways is estimated by the EPA to exceed $600 billion. The money just isn’t available for it.

The other problem is that people simply didn’t want to believe that this could happen. Those people in our country would be poisoned for months, and get no help, is hard to believe. Combine our willful blind spots with aging infrastructure and a severe lack of funds, and you have a recipe for disaster.

The fact is, the government needs to be more than politics. There need to be people in charge who know what kind of shape the infrastructure is in and be prepared to act quickly if any red flags come up – not only react to outside pressure. In order for that to happen, the citizens also need to be informed. They need to be prepared to stand up to a government that doesn’t act quickly and get the attention of the media.

Cities like Chicago and Philadelphia are working to replace their water systems. All over the nation, actions are being taken to clean up waterways. While the Safe Drinking Water Act established a baseline for what we can expect of our water, we need to keep updating it. In that effort we need people to test our local water supplies, clean them up and actually respond appropriately to potential problems.

In that vein, it does seem like some of the issues in Flint were due to simple incompetence and negligence. Proper training and oversight in water management would appear to be a great starting place for dealing with this issue, at least in Flint.

No matter what, the important thing here is that we learn from what happened in Michigan. We need to take complaints about our water seriously, and not simply assume we are immune because we live in America. If we start looking at our water seriously and working to protect our infrastructure and supplies, we may be able to avoid issues like this in the future.

Megan Ray Nichols loves discussing the latest scientific discoveries with others on her blog Schooled By Science. You can follow Megan on Twitter @nicholsrmegan.