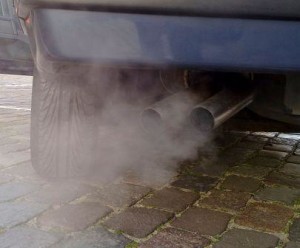 India is the seventh largest country in the world and almost 30% of its population resides in the urban areas according to the 2011 census. The decreasing viability of the agricultural sector and increasing employment opportunities in the cities has led to urban expansion, which has brought about an increase in the movement of goods and services which in turn are usually propelled by fossil fuels. The increasing GDP is a great sign but what the GDP doesn’t include is the harmful impacts of the growth. The use of fossil fuels, have long been known to cause air pollution which are not just hazardous for living beings but also plague our environment.

The motorized vehicles and its proponents form a major chunk of air and noise pollution and are a major threat to the society. A study carried out by Central Pollution Control Board (CPCB) in six major cities (Delhi, Bangalore, Kanpur, Chennai, Pune and Mumbai) reported that vehicular exhaust and re-suspension of dust due to vehicular movement of the transport sector contributes pollutants to more than 30% of the ambient air quality. It has been found that currently, approximately 1000 personal vehicles are daily added on the roads of Delhi. The rate at which the automobiles are being added daily to the road may soon paralyze the entire system and leave virtually no surface to move on, in the coming decades. Delhi has more automobiles than Kolkata, Chennai and Mumbai combined. A total of 8475371 private vehicles and 356821 commercial vehicles were registered in Delhi until 31st march 2015 and this huge number doesn’t even include the number of vehicles from the neighboring states like Uttar Pradesh, Haryana which are often seen on the roads of Delhi. 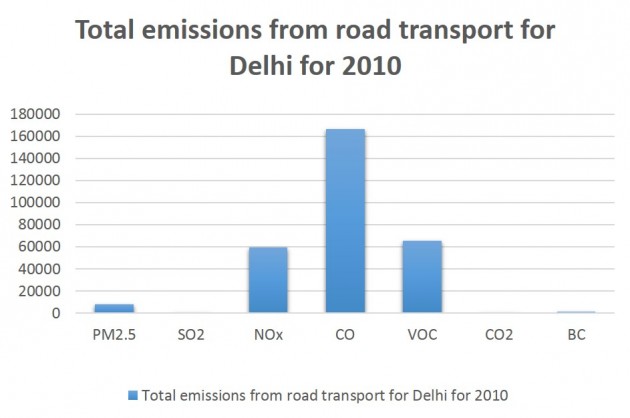 All totals in tons/year, except for CO2 which is in million ton/year

The parameters for R.K. Puram, measured by Delhi Pollution Control Committee on 3rd January, 2016 converted to US EPA AQI standard –

The increasing pollutant concentrations have made fresh air a luxury now. The health impacts associated are usually seen in the long run and people in the urban areas are hence oblivious of their basic right to breathe clean air. A study carried by Shakti Foundation in six tier-1 cities found that major changes in the transport sector like increase in use of non-motorized vehicles by about 20%, increased proportion of use of public transport by approximately 20% use of alternative fuels in three wheelers and public transport can potentially decrease 27% of the premature deaths by 2020 in the test cities. About 49,500 deaths in 2010 and 158,500 by 2030, was attributed to the transport sector by health impact analysis in India. Air pollution impacts greatly the most vulnerable that is, the sick, old and children leading to respiratory illness, allergies, cancer, decreased fertility, cancer, premature births, etc.

The CNG programme launched in New Delhi lost the initial success it had shown. After the launch of the programme in 2001 with a PM10 level of 149µg/m3 in the residential areas a drop was registered in 2005 but the levels escalated to 209µg/m3 in 2008. The city has taken a lot of steps to curb the level of pollution like strengthening its pollution under control system with new equipments, has advanced emission norms for the vehicles, conversion of buses and light commercial vehicles to CNG and imposing restrictions on entering of commercial vehicles into the city. The most recent step taken for ensuring safe pollution levels in Delhi under the guidance of Chief Minister Arvind Kejriwal is the odd-even formula for which he got mixed reactions.

Emulating various countries like Mexico, Chile, China, Ecuador with the aim of curbing the pollutant gas concentrations to safe level the odd-even formula was launched on a trial basis. The debate persists that the odd-even formula is not a long term solution for the crisis currently being faced by Delhi but those in support of the formula state that one will learn on following the path and will most likely stumble upon the most appropriate solution in the time period. Moreover, the odd-even formula will have its own benefits like reducing the number of cars on road and hence help in reducing traffic jams, road accidents and also promote amongst the people the good habit of car pooling. A grade 8th student named Akshat Mittal has developed a website to cater to the problems of the people by effective car pooling.

The purpose of the odd-even formula is to cater to the broader issue of sustainability. The odd-even formula is a sure shot quick fix solution to the acute problem of air pollution being faced by the city. There has been a lot of divided opinion on the matter and that was expected at the very outset because it involves certain amount of personal discomfort for the people who are used to their private vehicles. It is hence important that the public transport system is strengthened and so is the transport policy with inputs from all domains like sociologists, urban planners, environmentalists, etc. People may face some amount of discomfort but on looking at the broader picture, the formula will reduce traffic, reduce the time involved in transportation and most importantly ensure safe air to breathe.