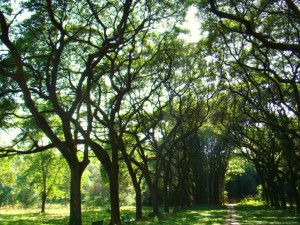 “Earth provides enough to satisfy every man’s needs, but not every man’s greed.”
― Mahatma Gandhi

The 20th century was the century of material development. Industrial development/wealth was regarded as the source of peace and happiness. Consequently, all efforts were made to amass as much wealth as possible. But the prosperity did come at a cost. We paid and we paid heavily. We sold ourselves, we converted Nature into Cash. The natural wealth was not only thoughtlessly exploited, but it was destroyed on a massive scale. Evidently, the forest areas have squeezed, the quality of ground water and other natural resources including air has deteriorated.

Nature has bestowed living beings with three gifts- atmosphere (air), water and earth (soil). The yardstick to measure real development should be the increase in quality and/or quantity of these basic capitals. But the fact is that there has been an increase of thirty percent in green house gases in the last thirty years. The quality and fertility of soil is touching new lows every day and the effluents we have been adding in water lately have not only taken a toll on our health but also on the health of others in the ecosystem.

The dazzle of electric light and the sound of electric fans have finished the common man’s thinking power. In return, we pay huge price, addition of poisonous gases in our atmosphere every second.

The other gift of material civilization is the exponential pollution and consumption of water. The eyes of the farmer glitter with hope to get bumper crops when he spreads urea and other chemical fertilizers in his field. He is astonished when his soil demands huge quantity of chemical fertilizers to produce what he seeks, but he is helpless. His soil has become addicted and therefore needs more to satiate its need to achieve stimulation.

Furthermore, the effect of chemical fertilizers and the pesticides has been even more disastrous on water, not only poisoning the ground water, but also the surface water. Probably the living beings have acquired the capability to assimilate these, but it has definitely affected their vitality, inspiration and freshness.

“Man is a complex being: he makes deserts bloom – and lakes die.”
― Gil Scott-Heron

How to compensate Nature for the cost of affluence, which it had to pay during the 20th century? The challenge to find out the answer is before the well wishers of mankind. This should not be the concern of a few for whom the flattering adjective of environmentalist has been used while the others have shirked their responsibility. The basic question is whether we will continue to live under the illusion of accepting affluence as development or will we change the definition of development? It should have continuity and it should not harm even a small minority. Let us examine the mega-dam reservoirs on these lines. These projects claim to solve the water problem- drinking water and irrigation: but for how long? The life of reservoirs is limited due to siltation. Forty-two sq. km. of the most fertile valley has been submerged because of the Tehri dam. The same is true of the Sardar Sarovar project. The life of Tehri dam according to dam builders is 100 years, but according to independent experts it will not be more than 30 to 40 years. Not only the beautiful hill area of 42sq. km, but the livelihood of lakhs of people was uprooted.

Then, what should be the plan for the sustained supply of oxygen, and maintenance of water level and the soil fertility? Its scientific answer is through tree farming.  It is also essential to meet the increasing subsistence needs of the growing population. Tree farming can give five to ten time higher produce from the same area. Trees rise towards the sky and we utilize the space for production, which is not possible in crop farming. So far seasonal fruits have been given importance as tree products. These cannot be preserved for a long period. So the immediate task is to find out more durable and nourishing fruits species for different ecological zones.

Among these fruits, the first priority should be given to dry fruits. In the hills, walnuts and chestnut come under this category. The second place goes to cashew-nut and almond, and the third is oilseed giving trees like olive.

It is often asked -what is the alternative to sugarcane? Because without sugarcane’s sugar that is used to make sweets, not only human beings even the deities are not satisfied. The reply is Honey. Honey is a tree product. In the hills, there is an excellent flowering tree- The Bird Cherry, which has been named as the “divine” tree by the grateful hill folk. This tree flowers in November and December when there are no flowers for the bees to live upon. Then there are the seasonal fruit trees, about whom everybody knows. The need is to find out different species, which may give fruit round the year. When trees are adopted as staple food, there will be less need of hospitals and medicinal drugs because most of the diseases are born in our kitchens where tasty, spicy and fried food is prepared.

“If the bee disappeared off the face of the earth, man would only have four years left to live.”
― Albert Einstein

Human beings are not the only children of Mother Earth- animals, birds and other living beings are also her children. Trees for fuel (to warm the houses), timber, leaf fertilizer and fiber for clothing will have to be grown. I have given them the name of five ‘F’ trees food, fodder, fuel, fertilizer and fibre. Such land use will not only conserve the basic capitals of Mother Earth- soil and water- but will also increase these. The economists so far have sung the glory of the increase in capital produced from the exploitation of the wealth of earth, but it was like putting on a gold ring after selling the rose.. There is a need to give ideas the shape of a people’s movement and a lifestyle based upon it.

Historically, the 21st century is a psychological event, because it is not only a century but also an ending of a thousand years. We have entered a new era, with the achievements and failures of two thousand years of experience. The lifestyle to be developed in these times should not be the carbon copy of the past, but zero based, which may guarantee permanent peace, happiness and satisfaction not prosperity alone-to all the children of Mother Earth.

“How can we be so arrogant? The planet is, was, and always will be stronger than us. We can’t destroy it; if we overstep the mark, the planet will simply erase us from its surface and carry on existing. Why don’t they start talking about not letting the planet destroy us?”
― Paulo Coelho, The Winner Stands Alone

Bio- Anima Chordia is studying Chartered Accountant course (CA.) and lives in Udaipur, Rajasthan. She loves writing and reading about nature and its surroundings.