Renewables are a part of the electricity delivery supply chain along with many other elements – non-renewable generating sources, transmission utilities, distribution utilities, consumers etc. What happens in the larger electricity eco-system has a direct bearing on Renewable Energy (RE) and its future in the country. Project success requires not only efficient generation but also the downstream transmission and distribution sectors to work well. Investors should evaluate upcoming opportunities on technical, commercial and regulatory aspects.

Notwithstanding the number of issues faced by the power sector, statistics on generation capacity have traditionally shown a rosy picture. Big announcements include 4,000 MW of solar thermal capacity in Rajasthan and 750 MW of solar capacity under the National Solar Mission.

Two more UMPPs (8,000 MW) in Orissa and Tamil Nadu, completion of the first unit of Koodanakulam nuclear plant (1,000 MW) as well as a number of smaller thermal power projects are also coming up. 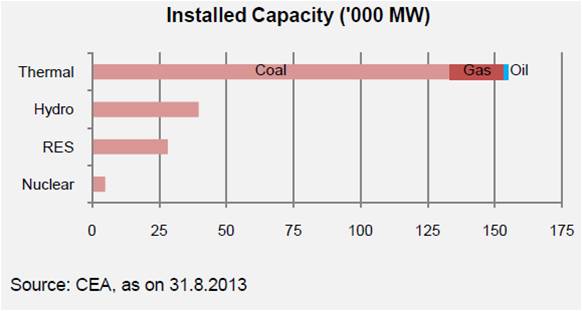 Fuel supply is a key factor for success of new thermal capacity. Electricity generation grew 4% [1]in FY12-13 despite a 28% drop in generation from gas plants. New capacity will increasingly depend on imported coal – imports are expected to grow more than 15% this year. It is also proposed to allocate all gas beyond 31 mmscmd (used for fertilizer) in the coming three years for gas power plants.

Investors will have to be provided tangible security of payments for them to be enthusiastic about investing such large sums in the power sector.

Many measures are being taken to mitigate the risk faced by investors. These include compensatory tariffs to address increase in fuel costs and a peaking power policy inviting gas power generators to bid for supplying power during peak hours. However, increase in fuel supply is expected to be the only long term solution. This in turn will require improvement in efficiency and rise in tariffs.

The 12th Plan envisages 88,000 MW of additional capacity. This will require substantial investment in transmission infrastructure and supporting measures to ensure grid stability. A large part of the required investment is expected from Power Grid Corporation (PGCIL). The company expects to invest around Rs. 20,000 crores per year for the coming five years.

Distribution continues to be the most challenging part of the supply chain. Discom losses are expected to cross 1.2% of GDP by March 2014. Both, technical as well as commercial aspects of the aggregate losses of discoms need to be addressed simultaneously.

The Asian Development Bank (ADB) has agreed to extend a $700 million loan to IIFCL. This will support take out financing for infrastructure projects that need customized long term lending. The Bank has forecasted a requirement of $2.3 trillion investment in India’s energy sector over the period 2010-2035 in its Energy Outlook for Asia Pacific.

As has been seen in the last few months, large plans for solar power addition can come to a standstill if the power generated from them does not have a commercially viable outlet. While maximum attention is given to addition in Generation capacity, it is Transmission and Distribution that need urgent focus.

Investors in renewable energy look primarily to receiving stable, long term cash flows from their investments. RE projects need to run for their lifetime of 20-25 years for them to provide attractive ROI. Their success depends not only on good technology and maintenance but also on receiving payment in full and on time.

The capacity and health of the transmission and distribution sector is important to RE generators whether they supply to Discoms through long term PPAs or to third parties through Open Access.

Till the time these issues are addressed, Investors will have to be choosy about selecting new investment opportunities. They need to beware of technical, regulatory as well as commercial risks expected from RE projects and factor these in their business plans.

Disclaimer: This article is based on monthly newsletter of Agneya Carbon Ventures Private Limited. You can download the PDF version of article from here.