The future of solar technology is immense in India. The currently available principle solar technologies comprise of solar PV’s and solar thermal with variations of the two. While solar PV makes use of the photoelectric effect, solar thermal aims at concentrating solar energy and storing it in insulated containers for use as per requirement. (Know more about booming solar market in India)

Solar farming takes the utilization of solar power a step further. It involves bringing a large area for harvesting solar energy just like a large farm enterprise makes use of solar energy to raise a crop. For a country like India, it makes more sense to invest in solar energy as being a tropical country; we have areas capable of harvesting solar power throughout the year. Such farms theoretically can be established anywhere but ideally are more favoured on deserted wastelands. 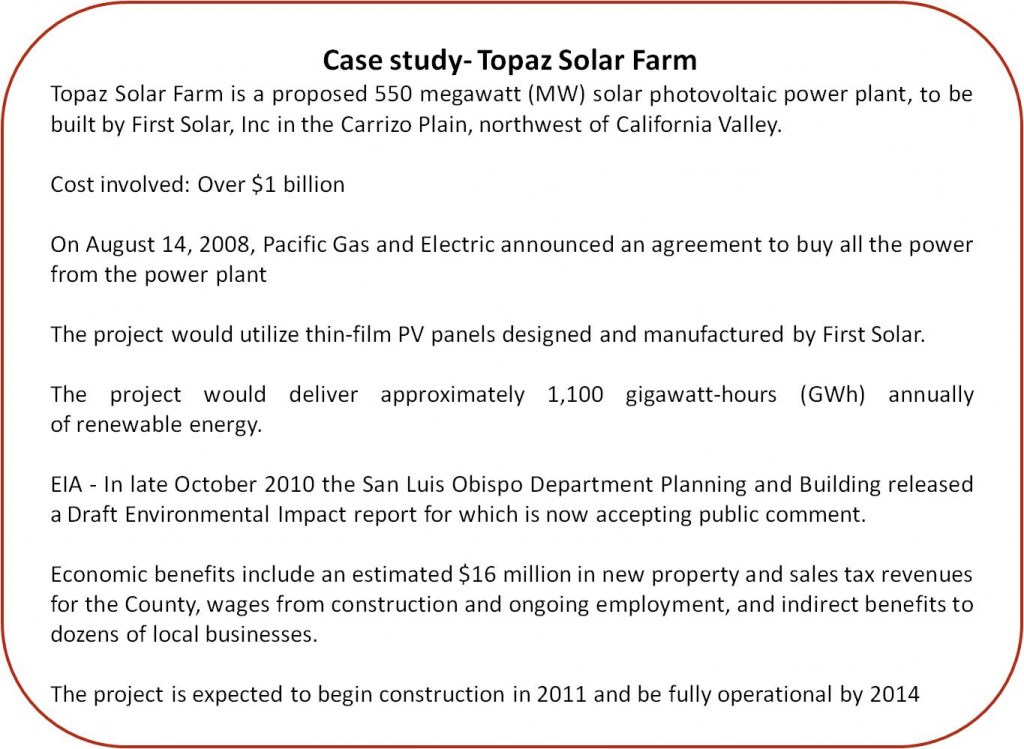 Skeptics point out that the high costs of solar energy will never let it come to the forefront but that is no reason for neglecting a technology. Each technology is expensive at first, you only need to look at mobile handsets which majority in India could not afford a couple of years back but now are available in all possible ranges. When India can take lead in the telecom market, it can very well herald a revolution in solar power.

At present government subsidies are in place that neutralizes somewhat the high initial cost of solar power. The technology is presently in development stage and new breakthroughs are round the corner. Only recently, researchers at MIT were successful in developing carbon nanotubes in conjunction with azobenzene that can revolutionalise thermal storage. At present solar thermal storage either uses chemicals that degrade over time or the other option- to use batteries is not much favoured as the charge will degrade over time. Other storage options include element ruthenium which is effective as a storage medium but is rare and very expensive. The carbon nanotubes with azobenzene can offer a less expensive and better option because it stores more energy in less space. They store energy and can stay indefinitely in that form but when a stimulus is provided, revert back to previous forma and are ready to be charged again.

Solar farms should be established in India on the largest scale possible and with the National Solar Mission in place and a strong government commitment to promote solar energy; a surge in solar farms can be expected. As part of my earlier work, I have been closely studying solar power and the technology shows huge promise. It is clean, non- polluting and does not (unlike nuclear) pose any risk. Moreover, it cannot be stopped which is an added advantage; no nation can block solar energy in the event of a war while supplies of oil or uranium can be cut off if relations between nations are strained.